All of the Lights

I find this image incredibly comforting.

The Monday before Thanksgiving, I confessed to three of my co-workers that I didn’t really like the holidays that much. My margins are already too thin, and the holiday season adds so much activity. All I want to do is sit quietly and contemplate Advent blogs.

They empathized and shared their own holiday season woes. Then Ryan said, “Ya know, I really like the lights.” Without trying to shut me down, he took the conversation in a different direction. We talked about fun memories of picking out Christmas trees, and how we turn our Christmas tree lights on first-thing, even if just for an hour-and-a-half before we leave for work. I thought about how much I enjoyed a tacky light run my friend Dan organized downtown, one that gave us the chance to see the illuminated city at night from different vantage points.

On the Wednesday before Thanksgiving, I went to the infusion center with my dear friend Christy for my 11th chemotherapy treatment of 16. (Pretty sure I miscalculated how many treatments I had left in my last post–wishful thinking!) The center was crowded because the staff needed to accommodate cancer patients like me who normally come in on Thursdays. Because of the holiday, Thursday hours would be shorter than normal, and some of us needed to be there a lot longer.

Anyways, I normally get my own room, which works well because we can dim the lights and I can nap when the Benadryl kicks in. However, since the infusion center was so packed, my nurse said she needed to put us in a community room. The community rooms are not bad by any means. They have curtains you can use if you need them, comfortable reclining chairs, and the opportunity to interact with other patients more easily. But I still made an annoying comment, something like, “Oh darn. I’m used to being spoiled. I hope I can still take a nap in there.” Get it together, Scrooge.

Before we got settled, I saw one of my chemo buddies who is at the center every few weeks. She’s one of those rockstar people who is friendly, positive, tough, and thoughtful. She immediately picked up where we left off, asking about my friend’s wedding reception and whether or not I was able to look nice. (The need for extra makeup was my big angst when this chemo buddy and I initially swapped stories.) We could have talked for an hour, but I realized I needed to move it along and head over to my weigh-in. “Have a great Thanksgiving!”

After my weigh-in the nurse put Christy and me in our reserved corner of the community room and shut the curtain. She took vitals and sent a blood sample for lab work as we chit-chatted about Thanksgiving plans.

“Let’s pull back the curtain!” I said to Christy.

So it was us, the two gentlemen conversing, and one sweet, tiny older woman with librarian glasses. The gentleman who was the Encourager glowed. We learned he was an Air Force veteran and a deacon at his church. The more we listened to his story, I thought back to this C.S. Lewis quote from Mere Christianity:

Already the new men are dotted here and there all over the earth. Some, as I have admitted, are still hardly recognisable: but others can be recognised. Every now and then one meets them. Their very voices and faces are different from ours: stronger, quieter, happier, more radiant.

Talking with him definitely put some fuel back in my tank. And I still got my Benadryl nap. Hurray for community rooms!

So, that was Wednesday, which meant the next day was Thanksgiving. We do two local family gatherings, and the first one starts at 12 p.m. What do you do with two little boys on Thanksgiving morning? Get out the Christmas decorations, obviously.

Our first step was to string lights on the porches. Lincoln had convinced Bryce to buy “colorful lights” from Hobby Lobby, and out of their boxes they came. The boys did as best they could to help, but weaving the lights in and out of the spindles required a lot of focused attention for them. So once we got the lights in a decent place, it was time for a walk. 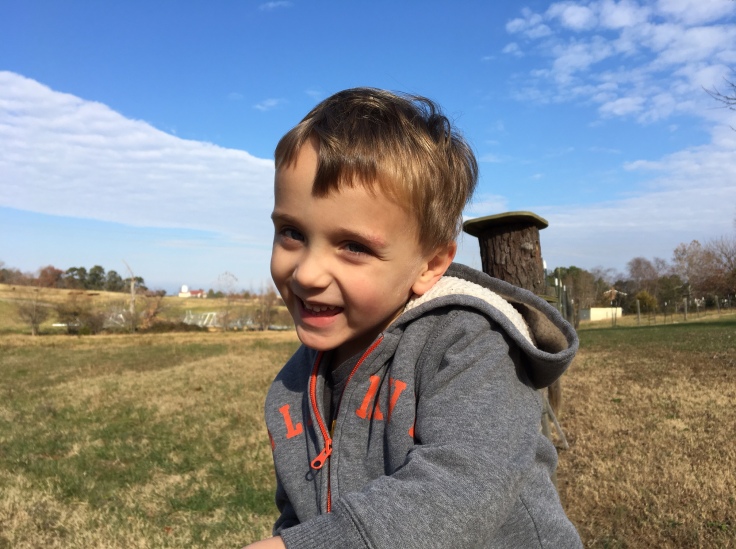 Our Thanksgiving day ended up being much more relaxing than I had envisioned when I complained to my co-workers.

On Friday, Bryce had to work but I was off. I did some deep yoga breaths as I thought about what the boys and I would do that day. Black Friday shopping? Ehhhhh. We decided to make two stops: Hobby Lobby to get a few more stands of colorful lights, and Lifeway to find an Advent calendar (fail). I learned quickly Lincoln has inherited Bryce’s love of the Christmas season, because as soon as we got home he wanted to get the Christmas boxes out of the garage and get to work.

It was endearing; I just let him go for it. An adorable explosion of decorations. 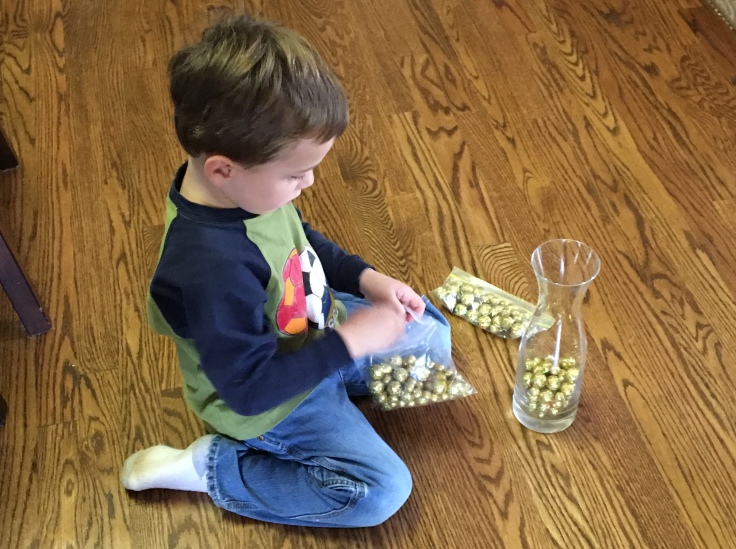 Thankfully, when Bryce came home, he discretely put away the Christmas boxes before things got too crazy. But in seeing Lincoln’s enthusiasm, I decided this will be the year I jump on the Christmas season bandwagon–even if I don’t get to sit and read my Advent blogs in solitude very often. Lincoln’s just at an age where he gets so excited, and he has the attention span for fun seasonal crafts.

So the Grinch is turning things around.

In treatment-related news, these days I barely make the cut to qualify for chemo each week. My medical team said, “You have the labs of a very tired person.” I mean, I scrape by. I have four treatments left now. Truthfully, I feel better than the lab work would indicate, but that might be because I’m an extrovert with a reasonably high pain tolerance left over from years of soccer tournaments and long distance running. (Nothing is harder than the 400 meter though. People who like that race are crazy! I RESPECT.) Even more likely–I feel okay because people are praying for me. Thank you for praying.

After my last chemo treatment (currently scheduled for December 29), I am going to take a Rip Van Winkle-length nap. See you in 2036, people.

Wait–no–my boys. Okay, I’ll settle on a month-long nap. That should do it. 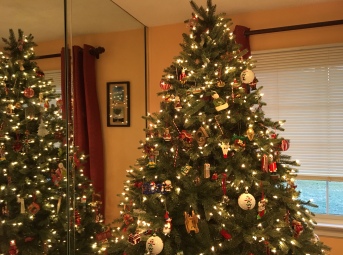 12 thoughts on “All of the Lights”