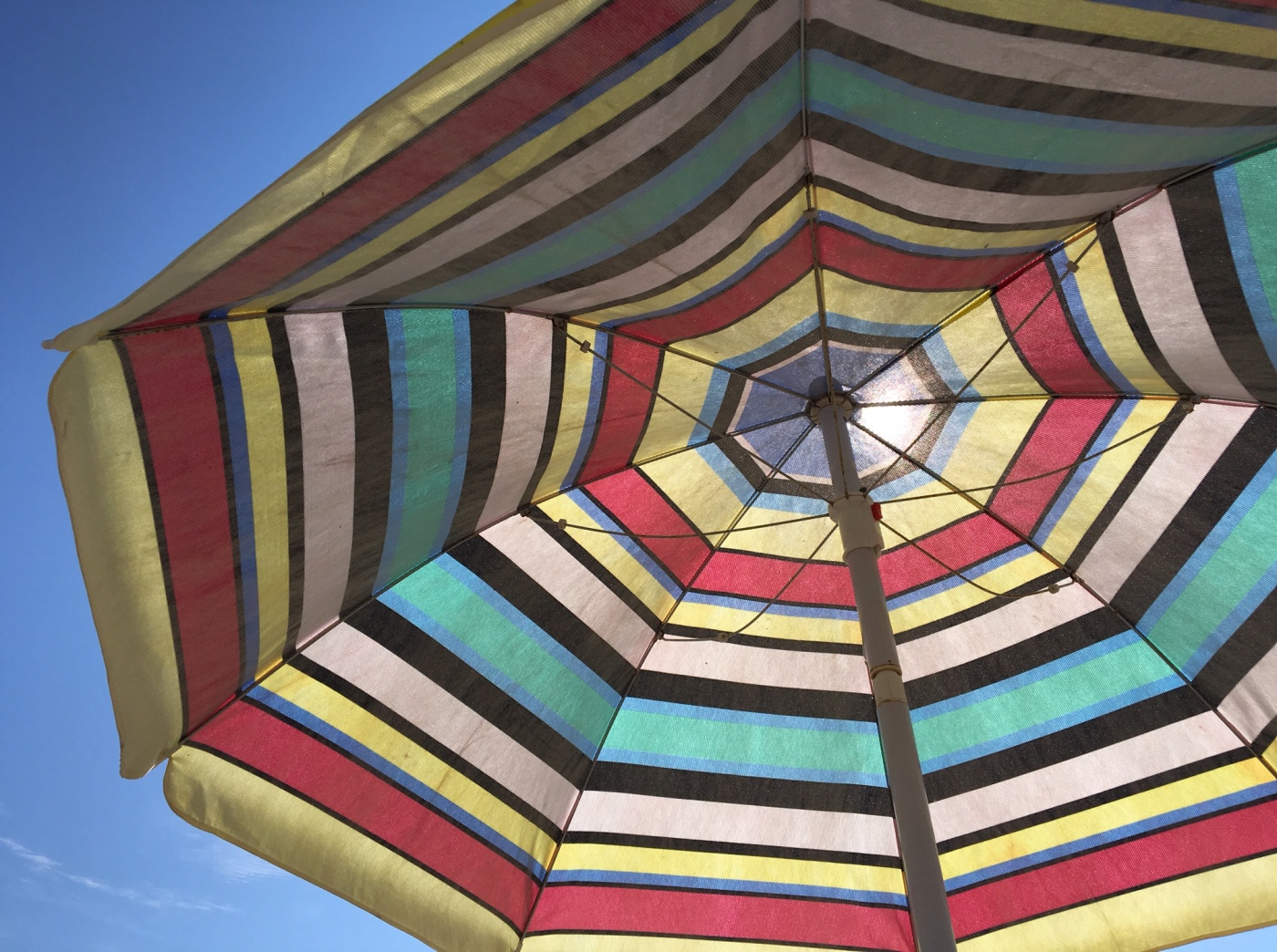 My first chemotherapy treatment was almost two weeks ago, on July 22. This is a recap of what went down.

I went to the hospital in a good mood, ready to get my pre-chemo ducks in a row. I turned into a sour diva when my nurse told me the administrative aspects (insurance) weren’t 100% locked and loaded, and they wouldn’t be by Thursday. Additionally, she said I didn’t have an appointment at the infusion center I was planning to use yet, and it was probably full for the next few days.

[Scowling and nashing of teeth.]

My nurse was extremely patient and asked if I’d like to aim for Friday at another facility. I vented that I’d need to coordinate some things with my husband [sigh]. She gave me a moment, I got over myself, and we scheduled the treatment at a newer infusion center in the East End of Richmond. She told me it was really cute, and that I’d probably like it.

Nausea-free bonus day! Dear friends Peder and Macy were passing through town, and they visited us in the evening with their daughter Delphine. The kiddos played in an inflatable pool in the backyard.

I always forget to take pictures when I’m really excited to see people.

On chemo day, we dropped the boys off at Loree’s house, got breakfast at Chick-fil-a, and headed to the East End. We walked into the infusion center like two camels loaded up with gear. We had blankets, magazines, a cooler with lunch, my work stuff, water bottles, bags of ginger candy, etc. etc. The staff laughed at us, like, “Are you guys moving in?” “Hey,” I said, “I don’t know what you’re gonna do to me. We just want to be prepared!”

The infusion center did indeed have a great vibe, and our nurses were wonderful to work with. First they ran lab work to confirm I was in good shape to receive chemotherapy that day. Then, we got down to business. As you may know, with many chemo treatments, the actual chemo part doesn’t take very long. There are other steps in the process though, as part of the treatment is receiving other drugs that complement the chemo and help the patient have a better result.

The nurses gave me ice to chew on during the administration of adriamycin. This protects the fast-growing [hmmm, what’s the technical term?] “cells in the mouth” from the drug to prevent mouth sores.

We were in and out in three hours. I felt great. We got to have a nice lunch. We picked up my anti-nausea prescriptions.

Later on that day/evening, I did start feeling nauseous. I remember drinking ginger ale, ginger tea, and chewing on a peppermint stick. I took one of the prescriptions. I never threw up, but I felt pretty bad. One of my friends recommended I put a cold towel on my neck. I did that, climbed in bed, and called it a night.

When I had nausea during my pregnancy with Lincoln, I learned a trick. If I got out of bed, got myself to the gym, and ran on the treadmill for 30 minutes, I could get the nausea to go away. For the rest of the day, I’d feel good. (We’re talking about low-level nausea stuff here, obviously. Some of my friends are warrior women who survived ultra-nausea and still wanted more children. You know who you are. You’re amazing!)

So, I figured I’d try the morning exercise trick with chemo. Bryce, who is more than earning his stripes as Dear Husband, set up a treadmill and some other cool stuff in the garage. Now I can take the boys in there with me in the morning. They can watch a show and eat breakfast, and I can exercise. I’ve walked for 30 minutes every morning since treatment. It’s definitely helping. 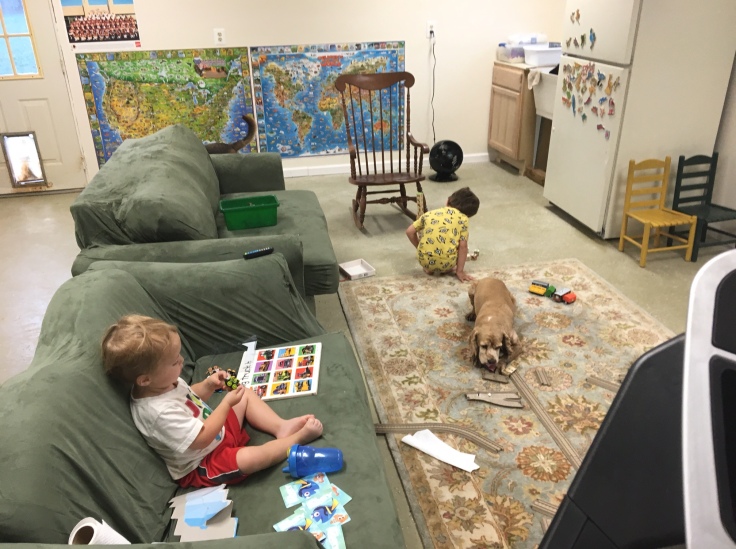 So, on the day after treatment, I felt good! I’d heard this might happen, and I certainly wasn’t complaining. I got to have a fun day with the boys, and then my friend Christy and I went to the screening of Unboxed’s film, hello_emony, in the Richmond 48 Hour Film Project. Hurray for easy days.

My friend Sarah come down from Northern Virginia late Saturday night so she could help out on Sunday.

On Sunday morning, I went to the infusion center to get a Neulasta® shot, which helps reduce the risk of infection during chemotherapy treatment. Smooth sailing. I met Sarah and the boys at a park afterwards. We decided to get lunch at Whole Foods.

While I was picking out my food, I broke into a sweat and started feeling dizzy. I had to face-plant on a table for a little while until the dizziness passed. Afterwards, I gingerly ate what I could. We went home, and I took a nap when the boys did. Sarah helped organize some things around the house. (Thanks, Sarah!)

When we ran another errand in the afternoon, my phone died. The screen went completely black. No biggie, but as the hours passed and troubleshooting over the phone failed, I started to panic. (Let me add I have not done a good job of running backups or befriending iCloud.) (Also, there were so many cute pictures and wonderfully hoarded notes-to-self on that phone.)

Long story short, I had my first big meltdown since my diagnosis. Of course it wasn’t really about the phone. It was about having cancer, and the loss of control, fear, vulnerability, and unknowns that go along with that.

Sarah and my mom were great comforters, and they made sure the boys got a legitimate bedtime routine as I rested.

On Monday, I worked from home because the drugs were making me feel weird. I was super-sleepy, my appetite was comprised, and the sun felt really bright. Bryce worked on getting the phone situation figured out. We randomly lost power at one point, so I had to hustle over the library for Internet, but overall the day could have been a lot worse.

That evening I’d signed up for a free session for cancer patients about how to “look good” during treatment. (Yes, I signed up! Why the heck not?) After feeling like I was in a parallel universe all day, I didn’t really want to go to the session. But I got in the car–and here’s the real reason– because I wanted the instructor to teach me how to tie head scarves (as advertised on the flyer). I was thinking, “This is my one chance to look like Erykah Badu.” You know, really turn some lemons into lemonade.

Well, we never got around to the head scarves. Instead we put on a lot of makeup, which, I mean, you be the judge, but I feel like I can mostly do. (I get by.) The makeup teaching didn’t feel all that chemo-specific, with the exception of eyebrows. I am confident I was missing the point of the event. The purpose was to connect with other women and feel beautiful. Ms. Entitled Debbie Downer just wanted to learn a new skill.

I said I needed to go “coordinate some things with my husband before tomorrow.” I left looking like Ziggy Stardust, got back in the car, and cried to my friend Abby about how “I wasn’t a warrior woman.” I unloaded a long list of woes and feelings. I was officially in the pit.

On Tuesday I went to the office. I was still in the pit, though. We established I needed a Good Day/Bad Day code. Right now I’m thinking thumbs-up and thumbs-down will work.

At 9:00 p.m. that night, my will came back. It happened suddenly. One moment I was still feeling discouraged, and the next moment, I started to feel hopeful and excited about my life again.

Thanks for all of the prayers.

It’s amazing how different a person can feel from one day to the next. Feelings–both emotional and physical–can eclipse the truth of the situation, even though they’re fully part of the situation. Does that even make sense? (Sounds like something that would get redlined out of a college essay.) I’m just in awe of the fact I can be in the pit on Tuesday and joyful on Wednesday. I hope the next time I’m in the pit, I can hang on to the capital T Truth more.

To those of you praying: I imagine your prayers as little rungs on a ladder. One of you gently throws the ladder down into the pit. By grace my strengths returns, and I can climb up and out, rung by rung.

On Thursday evening, we drove to the beach with the boys and stayed there until Sunday afternoon. I am so thankful the timing worked out and I could have quality “normal” time with my people. To my doctor: I wore a lot of sunscreen and sat under an umbrella like you told me to. 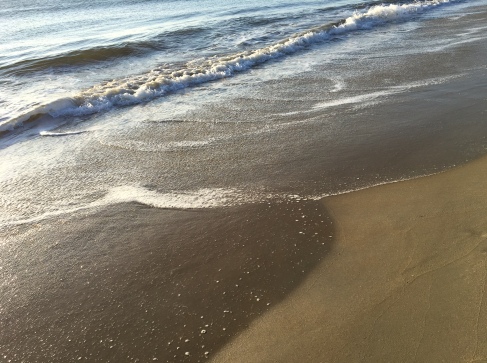 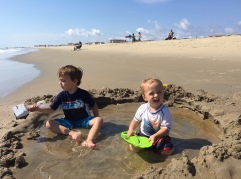 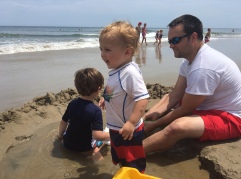 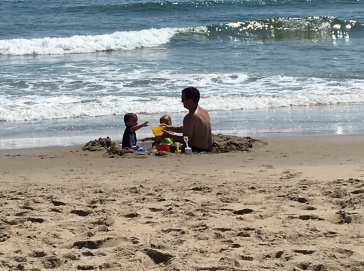 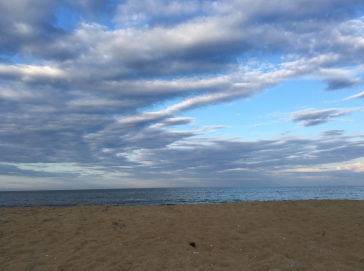 Next round is Thursday, August 4.

I would have despaired had I not believed that I would see the goodness of the Lord
In the land of the living.

10 thoughts on “My First Chemo Treatment”