As much as I complain about the onslaught of winter, I secretly like it. Winter is like the early morning. When I rally to experience it, I’m rewarded. It’s still and peaceful, the light and the blues and grays of the skies are different each day, and the coffee is so good.

Most of my favorite memories while traveling take place in the winter. I backpacked around the South Island of New Zealand in the cold. I’d wake up early in the hostel, quietly put on my thermal leggings and fleece, tie my shoes, and go outside for a jog. I’d see my own breath and pull my hat further down over my ears. I would explore whichever town I was in before it stirred, take in the cobalt lakes and stone-cobbled creeks before they were littered with tourists. 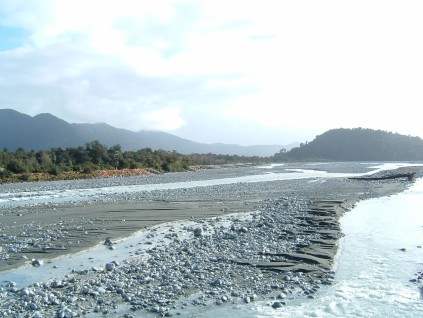 After college I lived with some friends for a short time in a house on Wolfe Street in Harrisonburg, Virginia. It snowed overnight, and my roommate Sarah, another early-riser, agreed to go for a long walk. We embarked before the sun came up. We wanted to make the first snow prints.

I might be projecting, but I’m pretty sure Lincoln loves exploring as much as I do. Even in winter. Now that he’s old enough for a little hot chocolate, he too is motivated by the promise of a warm drink after a nature walk in the brisk air. It’s so much easier to enjoy the outdoors in the other seasons, but winter can be a giving friend, too. I know we had fun last year in the cold. 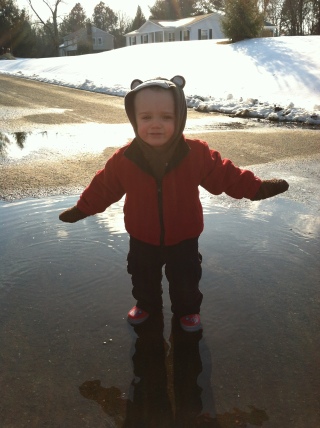 We have Hyatt in the picture this time. I don’t think I can stuff him in the Baby Bjorn with his coat on, but we have a North Face bunting that works great over a few layers; and women at the mall assure me he’ll tell me if he’s too hot or too cold.

It’s January 10, and I hope to defeat the winter blues by getting outside with Lincoln and Hyatt whenever reasonable. It probably won’t involve a stroller. It will probably look like Lincoln crouched down in the corner of our yard with a little stick, digging for rolly-pollies underneath green, frosty moss. He will be disappointed because beetles, like tourists, don’t like the cold. I will be swaying Hyatt and hoping I put enough clothes on him. Eventually, Lincoln will look up, glassy-eyed and say, “My hands are freezing!” We’ll go make hot chocolate.

One thought on “Nature Boys”